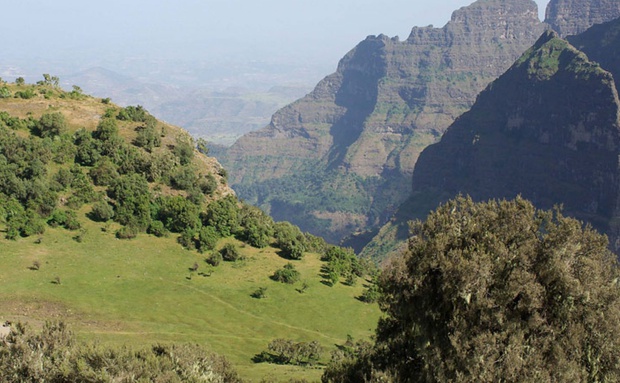 The diverse country of Ethiopia is filled with gorgeous natural scenery and some of Africa’s lesser-known wildlife as well as having a history that’s left its wide-ranging landscapes laden with historic treasures, ranging from 17th-century castles to ancient tombs and obelisks. If you haven’t thought about taking a journey to Ethiopia, here are the top reasons you should.

With over 80 ethnic groups and some 200 dialects, each ethnic group preserves its own unique customs and traditions. In the remote mountains and in the Great Ethiopian Rift valley, you’ll find unique tribes living a lifestyle they were living thousands of years ago. The Omo valley was isolated from the rest of the world for more than 1000 years and is home to an exciting mix of many small and distinctive tribes, including the Karo, the Mursi, and the Hamer. All of the tribes retain their age-old traditions and rituals, and some communities have been opened to tourists who are privileged to learn about their tribal traditions.

Although there are many tribes that are found within this area, it’s fascinating to learn how they find unique ways of expressing their artistic expression. For all the exotic variety, there is a similar thread in all of Ethiopia’s people: they’re incredibly friendly, hospitable and proud to show you their beautiful nation.

Ethiopia’s landscape varies from deep depressions, the vast expanse of Lake Tana and the arid plains of Omo Valley to the sprawling city of Addis Ababa and the craggy peaks and valleys of the Simien Mountains. You’d be hard-pressed to find a place with more striking contrasts than this one. It’s anything but those images you probably remember from back in the 1980s, which showed Ethiopia as a barren land, filled with dirt, dust and more dirt, without a plant in sight. While there are a few areas like that, there are plenty of lush, green areas. More than 70 percent of the mountains on the African continent can be found in Ethiopia, making it a hiker’s paradise too.

Stepping into Ethiopia, you’ll not only feel as if you’re worlds away from home in an exotic land, but you’ll feel as if you’ve stepped back in time. As the world seems to get smaller and smaller, and the streets start to look more similar, it’s rare to find yourself somewhere that truly feels different. Ethiopia certainly provides that, and a whole lot more. Many people here get around the old fashioned way – by donkey cart or horse and buggy. The donkeys aren’t just a gimmick, in rural parts of the country and provincial towns such as Awassa, horse-drawn buggies and donkey carts are the standard mode of transport. Out in the country, wooden plows are drawn by oxen, women wear traditional dress, children offer to shine your shoes for pennies, and while there is still poverty, most have enough to eat.

Here there are contrasts with the new and old everywhere you look. Unlike the countryside, in Ethiopia’s capital of Addis Ababa, there is a massive building boom with modern glass buildings going up side by side with tiny street shops. Many of the women here dress as they might in any European capital, and they walk by talking on their smartphones too.

Ethiopia’s also offers a fascinating mix of religious sites. The small town of Lalibela is home to one of the world’s most sacred sites with 11 rock-hewn monolithic churches, each carved from a single block of granite back in the late 12th- or early 13th-century. The structures are noted for their artistic splendor, and each has a distinctive architectural design. They’re actually dug into the ground, with the roofs at ground level. The walled city of Harar houses 99 mosques, you’ll find island monasteries at Lake Tana, and one of the oldest churches in the world, the Ethiopian Orthodox church, which was founded more than 1,600 years ago. There are many religious ceremonies held throughout the year that are unique to this country too, particularly Timket, Genna, and Meskel.

History buffs will be in heaven here, with Ethiopia’s history including everything from hominid ancestors and Stone Age hunter-gatherers to emperors, invaders, castles, palaces, and a lot more. You’ll find practically an endless number of outstanding historical sites to explore, and with knowledgeable guides, leave with a real insight into the country’s fascinating history. In Ethiopia’s most ancient city, Axum, the capital of the historic Axumite site, is a wealth of remarkable monolithic obelisks, the three most important being decorated to represent multi-storied buildings, complete with doors and windows. The largest, nearly 115 feet long and weighing 500 tons, is the biggest piece of stone ever cut by humanity anywhere on earth. Just outside of town are the remains of an early Axumite palace, believed to have belonged to the Queen of Sheba.

Ethiopian food is one of the world’s most exciting cuisines. Eaten with friends and family, it’s extremely unique and extraordinarily flavorful. The way that it’s served, on a communal platter, is specifically designed for sharing the food, as it isn’t meant to be eaten alone in Ethiopian culture. The most well-known dish is injera, a large, spongy, pancake-like bread on which portions of spicy meats and veggies are served. The injera is actually used not just as a serving dish, but as an eating utensil for scooping up the sauces – a messy, but delicious experience. If you’re a vegetarian, you can enjoy dishes like Shiro wat. Along with injera, Shiro wat, sometimes simply called Shiro, is one of the most widely consumed dishes in Ethiopia. It consists of chickpea and broad bean flour, mixed with garlic and onions, and made into a thick, almost paste-like substance – similar to refried beans, but smoother. While non-vegetarian versions of Shiro often include quite a bit of butter, the vegan version usually uses olive oil instead.

If you’re a coffee-lover, visiting Ethiopia means you’ll be able to say you’ve been to the place where coffee was first discovered. In the 9th-century, a goat herder found that after his goats nibbled on the coffee beans they wouldn’t sleep at night. Today, coffee is still grown and roasted across much of the country. Taking part in an Ethiopian coffee ceremony – an integral part of Ethiopian’s social and cultural life – is an especially eye-opening cultural experience, which is always followed by a massive jolt of caffeine in the freshest cup of coffee you’ll ever taste. All you need is a tiny cup and it will keep you going for hours. In most parts of Ethiopia, the ceremony takes place in the morning, at noon, and again in the evening as the main social event in the village where the community, politics, and personal lives are discussed.

In Ethiopia, you can attend a festival at just about any time of the year. They offer lots of color and insight into Ethiopian culture and tradition. Cultural affairs and sporting events abound throughout the year, the biggest of which are held in Addis Ababa. Dance and musical performances are a common theme of traditional events, along with art and religion. The Timkat Feast is a three-day festival held annually on January 19 that celebrates the baptism of Christ on the Jordan River. Beautifully decorated tabots (tablets onto which the Ten Commandments are inscribed) that represent the Ark of the Covenant are paraded around the capital city. Both the Ethiopian Film and Music Festivals are held in May and feature outdoor film screens along with a series of musical events and concerts that celebrate the wide variety of genres and styles that have emerged here.

Latest from our Blog