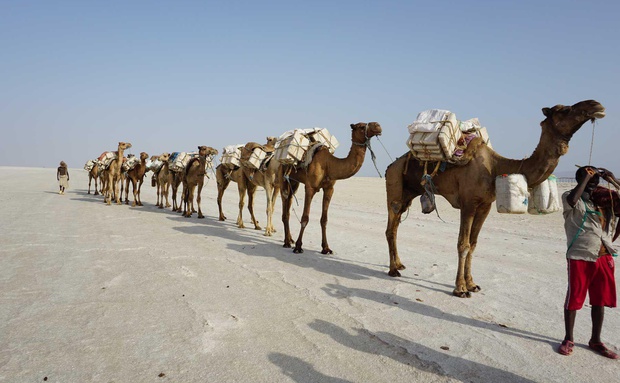 The famous volcano with its bubbling lava lake and the rare possibility of experiencing the nomadic tribe living in this desert- the AFAR people, survivors, and warriors in the hottest and one of the lowest places on earth! Today we drive from Mekele to LAKE AFDERA. The Danakil Depression can be said to ‘begin’ here. It is one of the most spectacular and also absolutely inhospitable regions of the world! Today it is a 4 hours drive on an asphalt road (220km), with a few stops for instance having a coffee with the locals and lunch, prepared by our own cook. The landscape starts to become drier and less and less inhabited; we will be passing the odd local on the way, but not many people are to be seen. We reach the local village Afdera, a 15 min walk from the Lake Afdera, around 4:30 pm, have a stop there to explore it and yet another coffee or coke with the inhabitants. After that, we continue our journey to the ending point of today: Lake Afdera, where is also our campsite. Meanwhile, the sun is setting we go for a swim, floating on the surface of the salt lake and enjoying the nearby hot springs, experiencing an incredible view. Dinner and a campfire before falling asleep right underneath a star full nightly sky with thousands and thousands of stars will brightening up your dreams.

Today’s aim is first DODOM (‘tree planting’) -the base of the ERTA ALE volcano and later, at night, Erta Ale itself. After breakfast at 10 am at the lake, it is a 70 km drive on sandy ground and over cold lava rocks. On the way, we visit the salt mines which are local Afar people. They pump saltwater over the surface and let it evaporate to create a salt crust. Lunch will be served in Dodom village, surrounded by many local people. Here we also have to show our permission to climb ERTA ALE (‘the smoking mountain’), get the needed camels for transporting the goods, more scouts. Dinner time is already at 5-ish since we have to start trekking up to the volcano around 6-7 pm. Dodom is approximately 8.5km away from Erta Ale and this stretch will take about 3 hours of trekking. Camels transport all the camping materials and some food to the rim of the volcano, where we spend the night watching the dramatic actions of the boiling lava. The Volcano is 613 meters high, the lava lake contains actually 2 caters, one of them, the northern one, is inactive with no Magma. It is notable for being the longest existing lava lake on this planet. Erta Ale ranks as one of the most alluring and physically challenging natural attractions anywhere in Ethiopia, it is a shield volcano with a base diameter of 30 km and 1km square caldera at its summit. The volcano contains the world’s only permanent lava lake. We set our camp a little bit away from the rim, on the other side of the wind so we won’t have to inhale the toxic gases. After enjoying this great, special, sometimes smelly, sometimes loud and hot experience we overnight in our camp, again with a brilliantly shining night sky.

Erta Ale- Dodom-Hamed Ela, from here we descend around early morning in the direction Dodom, which we will reach after 2hours. Here breakfast will be served and you have some time to relax. We start our drive to HAMED ALE, our next destination= 100 km/7 hours Lunch is served en route, we reach Hamed Ale around 4:30 pm, a bigger village with a total population of about 500. LAKE ASALE (lake ‘Red Mountain’) a huge salt lake-is in walking distance, where we take a deep breath and a wine or beer for sunset, taking in the many reflections. Our tonight camp is in Hamed Ale.

Hamed Ale- Dallol- Mekele Again: You get served an early breakfast at 6, around 7we start driving the short distance (approx 30 min) to Dallol (‘a colorful place’) via Asebo (‘the salt desert’), where- you can guess it- they mine salt. btw: 1,200 km2 of the Afar Depression is covered by salt. You can watch the workers breaking the salt from the ground, cutting it into rectangular pieces, and loading it onto camels. The caravans start from here. This is also the lowest point of the Danakil – 116 meters! We continue driving ahead to Dallol and stroll through the different landscapes formed by volcanic activities. Incredible, moon-like, colorful creations of the sulfur and huge salt mountains are to be found here. From here we proceed to Mekele (180 km, around 4 hours), leaving the lowland and make our way up (Mekele is situated at 2100m!), having wonderful mountains on our side, reaching the beautiful city at around 5 pm.